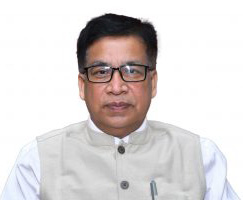 It is a matter of great pride and privilege to be part of this esteemed organization, Vikram University, Ujjain, that prepares the students of the present generation to be a professional of the near future. Irrespective of the varied streams in academics, Vikram University stands to be a colossal guiding lamp through its fine academicians and resources guiding the future of the country by molding the youths into a decorated professional of tomorrow.

Being credited as one of the oldest universities of the state, it has created a niche that is handed over to its soil from ancient times. With its rich heritage of education right from the times of Lord Krishna and his brother Balram in Gurukul of Acharya Sandipani enriches the perennial glory of this ancient university of Ujjayini now called Ujjain. Vikram University with all efforts and service proves to contribute and continue the same peripheral lines of imparting education guided by the ancient scholars of the soil. Named after “Samrat Vikramaditya” infallible in judgment and a great scholar, Vikram University has a glorious past, progressive present, and bright future.

The University has been on the path of delivering quality education by developing young human resources with ethical and moral values while boosting their leadership qualities, research culture, and innovative skills. As remarkably noticed even by the first Prime Minister of the country “Ujjain seems to be the ideal place for a great University and cultural center to grow up”; the focus of Vikram University is on the development of contemporary relevant curriculum.

The world is always demanding and looks forward in the young generation the spark of innovation and revolution in every sphere of knowledge. It is important to cope up with the changing environment of academics, science, culture, health, humanities, and other fields of knowledge that are ever-changing and demanding. This university acts as a resource to fuel up the ethical, moral, and academic values of the students to cope up and stand as an epitome in international lands.

The Mono of the University truly speaks about its ancient heritage. The lions and the Rising Sun (the Crest of The Great Vikramaditya) together represent indomitable courage and light of wisdom; the book poised lightly on the petals of the lotus signifies the numerous branches of learning. Justifying it, the university proposes more than 29 different departments of education in science and humanities. The Silhouette of the temple of Mahakaleshwara symbolizes the sacred culture of the ancient city of Ujjain, imparting knowledge and education to which the Sandipani stands as an epitome. The strong believer and practitioner of the motto विद्ययाƧमृतमश्र्नुतेVikram University robustly advocates knowledge to be the foundation of immortality.

With all substantial heritage and modern outlook to create a temple of learning and sophistication, an ideal epitome knowledge was translated into action on 1st March 1957 and still stands colossal in imparting and fulfilling the demand of knowledge in varied colors and forms, may be academic, cultural, physical, scientific, humanistic or social.

Along with creating a better human being for society, our objective also persistently makes efforts to bridge the gap between the present academia and the industrial demand. For the purpose, most of the programs offered by Vikram University follow the Choice Based Credit System (CBCS) with an Outcome-Based Approach. The flexibility in the curriculum has been designed with industryspecific goals in mind and the educator enjoys complete freedom to appropriate the syllabus by incorporating the latest knowledge and stimulating the creative minds of the students.

We plan to establish now Center for Excellences in Material Science, Bio-Technology, Physical and Social Sciences in collaboration with the lead center from Indian and abroad. We are developing a model to allow the young community of the Malwa region and all those who come in search of wisdom to Vikram University to have international exposure.

I strongly believe Vikram University is marching ahead in the right direction, providing a universal to the future generation, and playing a positive role in nation-building.

I, therefore, call students to be part of this revolution led by Vikram University where the knowledge that is vast as the universe is offered with a guided pathway for the students to become a learned scholar, academician, and young professional of tomorrow.

Publish the Menu module to "offcanvas" position. Here you can publish other modules as well.
Learn More.